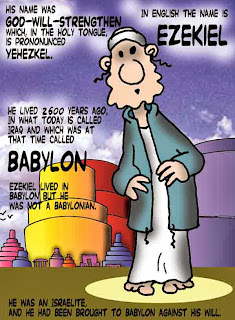 Although not a political enemy, Tyre represents the economically exploitative powers; she lives in arrogance because of her position in the world's economic systems. The first oracle (26) is against the city herself, while the second(27) mockingly laments her coming demise. Here especially you get insight into the Phoenician's role as merchants to the world, a passage from which John borrows heavily in his woes against Babylon (Rome) in Revelations 18. The third oracle (28) focuses on the sheer arrogance of her king. But Yahweh alone is King of nations, so Tyre must also fall. (Taken from How to Read the Bible Book by Book by Gordon Fee)
What makes you marvel when you read about God's concern for nations?
Posted by Hamilton TSCF at 01:00

Email ThisBlogThis!Share to TwitterShare to FacebookShare to Pinterest
Labels: Ezekiel, Marvelling at Prophecy

To start browsing this site